Just checking in, I guess. I’m still on the road to recovery. Groom bundled me into the car yesterday and drove me to Popham Beach to sit in the warm tropical storm breeze and watch the storm surf gettin’ all crazy. I would have taken a picture, but I was winded by the time we got from the car to the edge of the beach–a distance of about 20 yards. So, instead, I sat on the seawall, wrapped myself up in my scarf, caught my breath, and made my way back to the truck.

It was, without a doubt, the best bit of activity I have had in over a week.

For today’s recovery milestone, I am wearing pants.

Here’s a recap of the week. I comforted myself by watching every dramatization I could find related to English history, mostly so I could remind myself things could be much worse; I wasn’t getting publicly whipped, beheaded, and I wasn’t shivering with plague in the Tower of London. I became obsessed briefly with Oliver Cromwell, who I still despise. I have a weird fascination with Charles II, who took back the throne when Oliver Cromwell died. And, though I can’t believe the Magna Carta has been around since the early 13th century, I find it more amazing that King John died a year later of a bad case of the shits. (I was going to link the scene from Dumb and Dumber there because it seemed appropriate but I just rewatched it and, you know what? It doesn’t seem as funny to me as it did when I first saw the movie. I hate growing up.)

The thing that really got me through, however? Miranda Richardson’s interpretation of Queen Elizabeth I. Priceless. 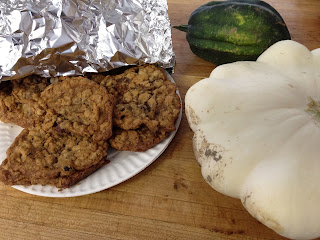 My friend Sara, who came by this morning with yummy tomatoes and squash from her garden along with the healthiest, most delicious cookies ever…except for all the butter and chocolate, sang this song for me when I started talking about the dandy movement and Beau Brummel in the late 18th century.

So, things are really looking up. To say I’m starting over is an understatement. I can’t get a full breath yet, so even yoga seems out of the question. And, even though it’s the best medicine, I can forget about having a good, hearty laugh for a while. But, I feel okay.

For eats, Groom has been carrying the local torch for me. Oddly, I can’t stop craving meat. I’m like Fred Flintstone trying to get past the neighbor’s BBQ without the smell of grilled meat pulling him off his feet. (Oh my god, I just found this Beau Brummel reference from the Flintstones based on this band. I had no idea where this band got its name until this week! Thank you, pneumonia!)

Back to eats. Groom purchased local foods and vegetables for me whenever he could. He even got a bag of Fox Family Chips and a whoopie pie from the local store for me to eat when I felt better. I ate the whoopie pie the other day (it was delicious), but the chips remain on top of the refrigerator. 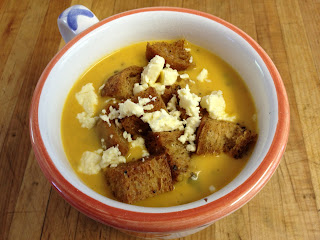 When I’m not pulling on a piece of meat, I’ve been craving mostly soup. My first made-by-myself meal while Groom was at work was squash and tomatillo soup topped with croutons made from Borealis Bread (which is just terrible bread so why do we keep falling for it) and Balfour Farms feta. Last night I had the most delicious Thom Ka (soup) from Best Thai in Bath. Otherwise, it’s been primarily green tea (not local) with honey from Pleasant Point Orchard in Richmond, Maine. And lots of Riiiiiiicolaaaaaaaa, which isn’t local but it’s European (which I allow) and Groom’s friend who works for the company sent us a case of it (which I allow since it’s a gift).

That’s a new rule, the gift rule. But, I’m thinking about the holidays. And those cookies in my kitchen.

This weekend, another friend has offered to drive up to see me for a little bit, which is just wonderful. I’m rattling around this house–literally rattling around the house with my seaweed and Rice Krispie lungs–getting very restless. Evidently, I’m at a critical point: if I’m not careful, I could come down with pneumonia again.

But then, maybe I’ll learn all I need to know about the history of, say, Italy. That might be interesting, si?

I have no reason to post the following picture. But, while I was sick, Groom got up early one morning to go fishing along the beach at Popham. When he came home, he came directly up to the bedroom with something wet and weird in his hand. He said, “I brought something back for you!”

I was tired and cranky and sore and I sort of ignored him. When I finally made it downstairs to the kitchen, this is what I found sitting on the butcher block. There’s no reason to share this other than as a way for me to go, awwwwwwww…… sweet. 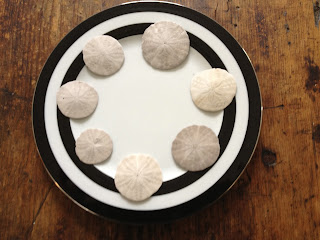