I haven’t had a sip of alcohol since this stupid pneumonia hit me. What’s that…10 days now? I don’t really want a cocktail either, which is good because I still can’t do much more than walk from the couch to the kitchen. I don’t need those empty calories.

But, you know how I know I’m still a little off? All right. Here’s the thing. I’m about to admit something that I have admitted to friends in joking conversations over dinner, but I’ve never stated publicly. I like to have a couple glasses of wine at night because it really takes the shine off my morning. See, a slight hangover dulls the edges of my day. When I’ve stopped drinking in the past, suddenly everything had become bright and shiny and loud and I got really really really productive. It was annoying.

(As an aside, I’m not particularly happy with the way the verb tenses are playing out in those last two sentences.)

There’s an episode of 30 Rock in which Jack, the character played by Alec Baldwin, quits drinking. It feels like that. (I just looked it up. I can’t find a good link, but it’s Season 5, Episode 4, “The Live Show.”) A sip of bourbon just makes everything so much…softer. And the mild fuzziness the next morning makes things move so much…slower.

Anyway, I haven’t been afflicted with clarity or productivity yet. In other words, I am definitely still sick if I’ve been sober for 10 days and I haven’t re-wallpapered the upstairs bedroom and covered the driveway in decoupage.

But, it’s okay. Like I said, I really don’t need those empty calories.

Come to think of it, though, my appetite hasn’t returned yet either. I mean, I have a really good appetite anyway, so for me to say my appetite hasn’t returned…it’s like saying Kirstie Alley looks thin because she lost 50 pounds. That joke doesn’t work. It’s mean-spirited and it doesn’t even make sense. What I mean is, my idea of “no appetite” is the equivalent of a normal person’s regular appetite.

For local and traceable food, Groom came home last night with some Moroccan chicken from What’s Happenin’, aka Good Times, aka Good Food Store in Bethel. It’s the most delicious thing ever with raisins and curry and cashews and creamy cream fatty cream and butter. I think he’s trying to help me get used to the idea that I go back to work at the mountain on Monday. (See how I buried that bit of information in the middle of this post? I’m not ready to fully admit it yet). 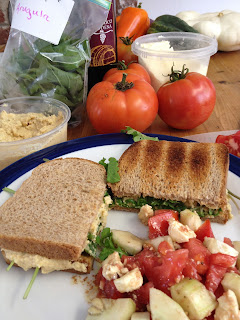 This morning, after eating some steel-cut oats that Groom left for me for breakfast this morning (he really is a saint), I made a sandwich on wheat bread with hummus and arugula from the aforementioned What’s Happenin’, aka Good Times, aka Good Food Store. I also chopped up a cucumber from Blackie’s and tossed it in balsamic and olive oil with Sara’s tomatoes and some feta from Balfour Farm. I was not hungry again for hours. Such a satisfying meal. So, for supper I just had more Tom Kha (soup) from Best Thai in Bath.

For activity, I paced the driveway while chatting on the phone with my friend Mo. And, I’ve now spent the better part of my bedtime trying to kill the biggest, hairiest housefly that continues to buzz and crash into the wall above my head. 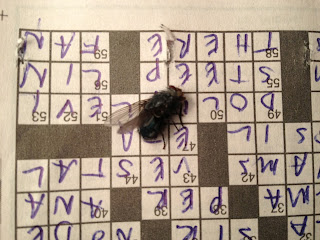