I’m supposed to be sailing right now. For the past few weeks, I’ve had it in the back of my mind: “you can get through this deadline, you can get through this dinner, you can get through this day because you’re going sailing in September.” I was going to spend four days on my friend Noah’s schooner, the Stephen Taber, drinking, eating, yanking on some line if I felt like it, rolling my eyes at people who insisted on talking in pirate (I chose that link because it reminds me of someone I used to work with; if you’ve worked with me in that last year or so, you know who I’m talking about), and sailing into my old stomping grounds in Brooklin, Maine, for a little party. Obviously, that didn’t happen. I’m not on a boat right now.

Instead, I’m lounging in my bed typing up my words like Edith Wharton, only without the servant picking up pages of my manuscript that I nonchalantly toss to the floor, surrounded by meds and lozenges and heat packs and a cooling eye mask.

Actually, that doesn’t sound so bad, does it? And, let’s be honest, Groom is totally picking up the pages of my manuscript as I nonchalantly toss them to the floor. 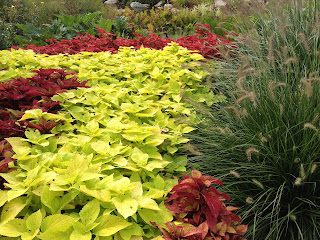 Some friends broke me out of the health ward this weekend and took me to the Coastal Maine Botanical Gardens in Boothbay. It led to a minor setback with the “p” as in “pneumonia” yesterday, but it was 100% totally worth it.

I’ve been thinking about local activities. I mean, shopping at local markets and boutiques is great, but I’ve never really talked about patronizing local establishments. This state is riddled with fun, local things to do, owned (or funded) by local companies and managed by local people. The Taber is one example; the gardens are another. But, First Friday is one of the greatest things ever–most towns have them–when galleries and shops open their doors the first Friday of the month and you wander about town. I’ve talked about local music a little bit, but there’s so much more than that. Right off the top of my head, I can think of a bunch of great local visual artists: Paul Brahms, Gideon Bok, Tom Curry, Michael Alderson, Tanja Hollander… this is just a quick think, too. What I’m trying to say is, check out your local gallery or museum or aquarium or even a festival, like the Pumpkin Fest in Damariscotta. Full disclosure, I don’t go to the Pumpkin Festival, but I hear it’s very fun.

I’m rambling a little. I should admit I’m at the tail end of my ride along the codeine express right now. 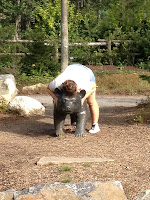 Let’s get back to the Botanical Gardens. First of all, I was with three of the coolest kids I know. The oldest daughter, a teenager, is interesting and interested. She’s talented and fearless. And, she doesn’t roll her eyes. Well, she does. But, when she does it, it’s almost endearing–and you can roll your eyes back at her without her running into another room and slamming the door. She introduced me to Robert McCloskey books (yeah, I never actually read them as a kid)–here, I totally busted her hugging a statue of the bear from “Blueberries for Sal”–and I introduced her to the Yeats poem “Leda and the Swan.” Seems like a fair trade. The kid has to grow up sometime. 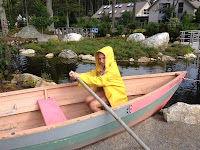 The middle girl is near and dear to me because she’s my godchild, which means nothing other than the fact that I had to stand uncomfortably close to a christening bowl on an altar in a church in Portland about a decade ago, and if anything happens to her parents (god forbid) I would have to carry on her religious teachings. This girl–who started middle school this year, poor thing–will walk up to a pond of frogs and, while everyone is excited about the frogs, she will point out the one dead frog off in the corner. I adore her. Look at the look on her face as she pretends to paddle a dinghy. 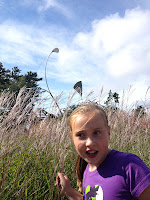 Finally, the third child is this quirky little girl who eats yellow mustard by the spoonful, knows how to play quietly by herself when nobody is paying her any attention (something I, myself, have never mastered), and has fun no matter what. She just…has fun. Always. I was trying to take a picture of the rotating sculpture near the entrance to the gardens and she photo-bombed me. It was fantastic.

So, needless to say, the company I kept at the Botanical Gardens made it worth the trip, but there’s so much to look at, like the fairy house garden, an area to learn about vegetable gardening, a treehouse, the garden of the five senses, which uses plant life and garden…amenities?…to stimulate your sense of sight, hearing, touch, taste, and smell.

Oh, and see? Religious teachings for my godchild. 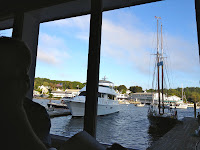 Next on the list, we went to Mine Oyster because the teenager wanted oysters–she eats them like candy; it’s awesome. We got some Damariscotta oysters, Glidden Point Cocktail oysters, and Taunton Bay (Acadia) oysters. In order of how I liked them: Glidden Point, Damariscotta, and Taunton Bay. I’d post a picture, but we ate them too quickly, so here’s a bad shot of the view instead. Here’s an oyster guide, courtesy of Portland Monthly. 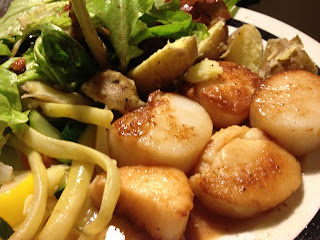 We then headed back to a friend’s cottage, camp, cabin, what have you where the mom of the these three girls made dinner. Now, let me tell you something, there’s a reason these girls are so cool. They have their parents’ DNA and this mom? She’s a chef. A real chef. We get back to this galley kitchen and she cooks up some vegetables from her husband’s garden with local potatoes in sage-infused olive oil from Eventide and sears the f*ck out of some scallops from Robinson’s Wharf, all accompanied by a salad with goat cheese from the Village Market and Deli and figs from I don’t know where. Mother of god, it was delicious.

Sadly, I fell asleep during dinner and had to be driven home. Yesterday, I spent the day in bed sweating, whimpering, moaning, and making an overall giant nuisance of myself to my poor husband who was trying to get some work done.

I’m up and about today–which means, I’m sitting up in bed with my computer–and I took a shower. I noticed a bunch of my hair has fallen out from being so sick. My hair is the most disloyal part of my body. One sign of trouble and it abandons ship like a pack of rats in a storm.

Dang. That reminds me. I’m supposed to be on a mother*fuckin’ boat right now.