This week has been a bit of a whirlwind and I have to admit I haven’t done anything to slow it down. After the Reach the Beach relay, Groom bundled me into the car and brought me to his parents’ house in southern Massachusetts where I slept for something like 13 hours. He then wrapped me up, dropped me onto his father’s boat, and whisked me down to the Cape for a few days of early morning boat rides. We were supposed to stay down there until the middle of next week, but weather and worries brought him back to Maine.

While we were on the Cape, we stayed with some friends who are active without being all “Look at us! We do stuff!” about it. While I slept off a long morning on the boat, this couple packed up their tennis gear and headed to the courts. And, while I sat on my computer cursing my inability to keep a good file system instead of scrolling through the new Mac Mail program for emails related to one of my freelance projects, the woman we were staying with threw on some running clothes and went for a jog before picking up her daughter at dance class and just before her husband left for his hockey game. I imagine he plays some sort of forward, but I don’t know. He’s kinda wirey, strikes me as quick on the skate.

My point is, I really have to stop talking about it and do something already. I mean, people work out all the time and I feel special enough to start a blog? That’s just crazy. I had a mild “p” for “pneumonia” setback the other day and had to sleep away my afternoon while Groom stayed on the water and caught us some dinner, but otherwise I’m pretty much back to fighting form. And by “fighting form,” I mean “sumo wrestling” form. I’d like to count sitting in a boat as exercise–you really do work the core in rough water–but I know that’s cheating. Enough with the excuses, already.

Since I haven’t gotten any exercise, I’ll talk about local foods. It’s tough to eat locally when you’re constantly on the road and you don’t have a schedule, you don’t know when you’ll be hungry, you’re at the mercy of others. I did eat some Pringles, but only a couple of them and it was because I wasn’t paying attention. And I had way too many Kit-Kats, but that’s because Groom bought a variety pack of white chocolate, milk chocolate, and dark chocolate Kit-Kats and I got carried away with the taste tests.

Most of my meals were eaten at the active friends’ house or at Groom’s parents’ house. For breakfast one morning, I had some leftover delicious fish stew, courtesy of my father-in-law with a modified recipe from…I don’t know…1840, as far as I can tell from looking at the dog-eared recipe page. It was fish, scallops, potatoes, wine, and cream and butter and fat. Holy goodness.

Then, Groom and I headed out on the boat with some roast beef subs from Maria’s in Scituate. For as long as I’ve known Groom, we’ve had this debate over which is better: A Kelly’s roast beef sandwich with extra sauce or a Maria’s roast beef sub with tomatoes, pickles, hots, mustard, and mayonnaise. He almost has me convinced, but I’m a North Shore girl through and through. I will admit, however, riding through the Cape Cod Canal with a Maria’s roast beef sub? Pretty much 100% awesome. 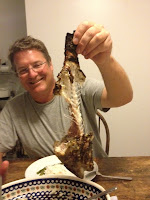 Last night was leftover lentil soup that my mother-in-law left on the stove for us. Again, delicious and I have to assume mostly local since she’s a really good shopper. Tonight, Groom cooked up a black sea bass that he caught down on the Cape; he stuffed it with lemon, garlic, parsley, and basil and brought out some asparagus he had frozen fresh and tossed in the oven. Pretty smart, that guy.

I’m looking at my list of foods and I realize I’ve been eating a lot of red meat and fish. I don’t normally eat so much red meat but I’ve been craving it. I should probably take a vitamin and eat more kale instead. The fish, however? It’s funny. It makes me think of my mom who could never get me to eat fish. Scallops? Yes. She would broil up some bay scallops and eat them like popcorn while watching Days of Our Lives when I was a kid and I would sit right next to her, psyched beyond psyched for some of those little pencil erasers of goodness.

I had a psychic tell me once that my mom was telling her from beyond the grave that I wasn’t eating enough fish. This same psychic told me I would have a spiritual awakening with a woman who had a name with a long-sounding “e” in it like…Kathleen or Sheila or Colleen. Oh, and I am supposed to be obsessed with a certain pair of twins and I should be married to someone named “John John.” This was when John Kennedy Jr. was alive so I was psyched. Psyched about the psychic. Nice.