I got a car on Friday after being without a car all summer and I just wanted to drive. As I may have mentioned, Groom is a fishing guide. He fishes for mostly striped bass and bluefish here in Maine. In September, however, he hightails it to Cape Cod and chases false albecore (called “albies” in fishing slang, or if you’re me and not paying attention, “falsies”). Groom practices catch and release, which means unless he plans to eat the fish, he releases it back to the water. Falsies, when they are released, will fly into the water and flip their tail as they head back to their school of friends.

I got that car on Friday afternoon and all Groom saw was the flick of my tail as I headed back to my school of friends. So, I haven’t had time to post. But I can tell you, I stuck to local venues.

Friday night, I celebrated with a friend at Robinson’s Wharf before heading back to her cabin and eating some type of concoction her husband made. Saturday, I spent the morning trying to locate a mechanic because my newly purchased car was making a bad noise. While I waited for the mechanic to verify it was merely a backing plate and it wasn’t my axle pulling away from my transmission…sorry wait whaaaat’s that now?…I joined my friend for lunch at Under Currach Tavern for the most amazing bloody mary and a split order of the most delicious fish and chips. Seriously. I’m going back there as soon as I can.

After spending some quality time at Two Salty Dogs, where I saw my fair share of cute as hell little dogs, I picked up my car and met another friend so we could go to a local show at SPACE Gallery in Portland, but we ended up stopping first at Katahdin where Winnie the bartender made us feel beautiful and valid while getting us liquored up on vodka for my friend and bourbon for me.

Here’s where I need to stop the a-to-z details of my weekend. This friend I was meeting in Portland, she mentioned that I seem to be talking in exclamation points. I took one sip of my manhattan made with delicious Maker’s Mark and I actually felt those exclamation points slide out of my head. The world went from being a local cable station with bad sound and bright greenish hues in a loud studio filled with pasty and miserable beings to a softer digital golden-hued living room filled with smiling beautiful people–all of whom found me to be delightful.

I don’t want to glorify drinking, but my god was it glorious. 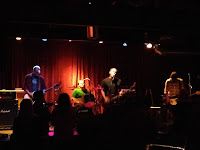 We missed the show at SPACE and ended up at Empire to see a young angsty rock band with one young groupie swaying in the front of a largely empty room. They were followed by Murcielago, a band comprised of some old Portlandites, including Matt Robbins (of King Memphis fame) who is both a great photographer and an amazing guitarist. If he were in a double bill with Nate Schrock from The Coming Grass, I might just fall into a puddle on the floor.

Was that too honest? I guess I can console myself with the knowledge that only a handful of people read this blog. And the fact that I love my husband…who I know for a fact reads this blog. So….

Annnyyyywaaaayyy…. the rock show–seriously, it was the kind of music that keeps going with, like, this always-present undercurrent of guitar–ended and we took a trip over to Otto’s pizza for a little late-night what-what hangover stop gap. It didn’t do its trick sadly because my friend needed to nurse her hangover on the couch Sunday with her half awesome half evil cat Frank.

I took the opportunity Sunday to wander town (exercise?) and pick up a pound of coffee at Coffee by Design and some cupcakes at Two Fat Cats for a potluck cocktail party I planned to attend on Sunday night.

I also bought a pecan pie. I think of my friend Nat every time I eat pecan pie. About…oh dear…10 years…ago? No. Ugh. About eight years ago (oh, that’s much better), I was eating lunch with Nat at Norm’s on Congress (now called Congress Bar and Grill, not to be confused with what used to be called Norm’s and then Downtown Lounge) and he ordered pecan pie. I crinkled my nose. Yuck. My mom had given me
a bite of pecan pie when I was a little kid and I remember thinking it was the grossest thing ever, tasted like…meat…and had the skeeviest consistency, like…raw…meat… Blech.

When it arrived, he offered me a bite and swore I would love it as an adult. I reluctantly complied.

When I brought this story up at a family dinner a few years ago, speculating that perhaps mom didn’t want me to enjoy pecan pie, my sister said, “Well, sure she didn’t want you to like it. There were only six pieces to a pie but there were seven of us in the family.”

Oh, to be the youngest of a large family.

Right now, I am not having a piece of delicious pecan pie from Two Fat Cats. The cupcakes, however, were a big hit at the potluck. I mean, who doesn’t love cupcakes? 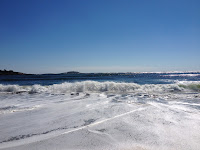 I will say, however, yesterday between wandering Portland and racing to the potluck cocktail party (that really is begging for a joke, but I don’t have one), I threw in a load of laundry and instead of crawling onto the couch to watch an episode of United States of Tara (thanks to Shanta for turning me on to that show), I drove down to Popham and walked along the beach for over an hour. Exercise!

Today, my exercise hour was eaten up by a trip to Auburn to get a headlight fixed in my new car.

Maybe I do deserve a slice of pecan pie after all.

Of course…it would be better if it had bourbon in it.