I was feeling sorry for myself because I closed my computer on work stuff and looked at the clock to see it’s 4 in the afternoon. It’s Sunday and I’ve been working all day. I shouldn’t complain. There are so many people who can’t find work and I’m complaining because I have too much work. That’s…what is that? Ridiculous, that’s what that is.

I was considering a blog post because I’ve been lax about posting, mostly because I have nothing to report and partially because I consider myself to be too busy (see pity party above). I decided to scroll through some photos on iPhoto to see what the hell I’ve been up to…you know… in the daily activity/local foods arena. It’s pretty abysmal, but I seem to have had a pretty nice day yesterday.

Groom and I took the car to Cundy’s Harbor for lunch where everything was closed for the season except Gurnet Trading Company, which is this funky little roadside seafood shack along the Gurnet River. It makes me think of old-time-y Florida. Then we drove back to Bath to eat lunch underneath the bridge bridge. I love industry and steel.

After that, I did a little freelance and then headed to Brunswick to see Sara Cox play at CLZ’s Singing for their Supper to raise money for the Mid Coast Hunger Prevention Program and then cocktails at El Camino (oh, I’m drinking again and I feel a little like Harvard Jim after he snacks on the funny brownie). Local music followed by local food and all for a good, local cause.

I do have to say… oh lordy here we go… Okay. You know what? I’m a lefty, bleeding-heart, party-line liberal. I vote D all the way down the ballot–though I should admit I once voted R because, frankly, I believed in the R candidate more than the D candidate in one election. Oh! Did you feel that? It was like an earthquake. My dad totally just rolled in his grave. Sorry pop. You were alive when it happened but I never told you.

In my defense, I’ve never voted for Jerry Brown or Nader… Aaaahhh…that settled my dad down some. He couldn’t abide a Nader vote either.

Back to the thing. Okay. This CLZ event was a lefty liberal “feed the hungry” thing. It was at the First Parish Church, outside on the lawn, in misty rain. The radio station was giving away reusable grocery bags as the freebie collateral. You can probably imagine the crowd. A lot of wet wool, plenty of hand-knit scarves, mud boots, long gray hair, long earrings… I think you get the picture.

I am on the same team with these people. I believe in marriage equality, miss muck boots in the poncho. I believe in a woman’s right to choose, ms short hair/long earrings. I believe in supporting local farmers, mr twig sweater and dreadlocks. But for the love of all that’s holy, can you please stop thinking about yourselves for one moment and stop talking while there is a performance going on and watch your damn kids because we are not a village that wants to raise your child.

One woman was up front and center openly and elaborately stretching her legs and rolling her neck before engaging in one of the loudest gossipy conversations, not 10 feet away from Sara. (People conversing during a movie or performance or while in a meeting? That’s a huge pet peeve of mine. What makes you so important that you can’t walk away or leave the room for your conversation?)

Sara was playing on a little stoop on the church steps. Not two feet away from her were two children playing on the handrail. They were yelling and shouting and leaning into the amplifiers. I wondered to Groom, “That is so weird. Where are those kids’ parents?”

After about 15 minutes, one of the children walked toward “I need to stretch in front of people and show how comfortable I am within my own skin” loud talker and addressed the man to whom loud talker was shouting. That was the boy’s father or guardian or whatever.

This weird antisocial behavior is why the left side of the argument gets a bad rap. To get anything done these days, you have to work within the confines of social order. Newsflash: This isn’t about you and your needs. This is about society and society’s needs. I’m not on welfare, never have been. And I still most definitely believe we should take care of those who live outside the margins of our money-making society. But god as my witness if you…you self-absorbed, self-congratulatory, self-righteous, ill-mannered so-and-so…if you’re on welfare? I’m going to start voting Libertarian.

No I’m not. Who am I kidding? I think everyone, no matter who you are, deserves to live at a certain standard and in good health. That comment I made above about confines of social order… That might be extreme because sometimes I don’t agree with what’s considered the “norm.” Some of the quote craziest characters are, in my opinion, some of the best people. Brother Boy from Sordid Lives comes to mind.

Just…just be a good person.

Is it weird I use a totally fictional character to make my point? Probably. 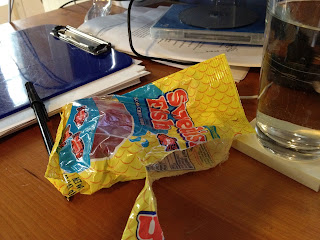 I haven’t worked out in a month. I think the pneumonia germs have left the building so I can’t use that as an excuse anymore so I’m giving some thought to hopping on the elliptical, which will definitely get rid of some of this anger I feel toward these ridiculously self-involved personalities.

But, frankly, I’m far more interested in eating the Swedish Fish sitting on my desk, beckoning me with their chewy delicious sweetness, before I dive into a bowl of homemade fish chowder, courtesy of rainy-day Groom.